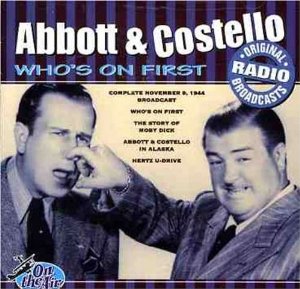 Dealing with Integrated Forensic Laboratories (IFL) and the Tarrant County District Attorney’s Office recently regarding lab reports bearing the name of former IFL lab tech Elizabeth Feller has turned into an Abbott and Costello skit.
IFL has quite the knack for hiring laboratory personnel with questionable work histories.One only needs to Google the term “Cherie Lemmon IFL” to find out about the cloud that settled over the Bedford lab in 2013. Houston attorney Paul Kennedy wrote an excellent blog exposing the shenanigans of Ms. Lemmon and lab director Nate Stevens.
This year’s Cherie Lemmon is a gal by the name of Elizabeth Feller.Ms. Feller and IFL parted ways not long after an attorney uncovered her “involuntary separation letter” from prior employer, CellMark.It turns out that Ms. Feller was caught violating a crucial policy in October of 2012:
“Liz violated two Cellmark Forensics case work policies that have been implemented in order to prevent errors in forensic laboratory, transfer errors and sample switches. “
In January 2013, she once again violated the policy by switching samples in a batch run and that ended her employment at CellMark.
Not surprisingly, Liz Feller landed at IFL.When the separation letter was exposed, Ms. Feller and IFL parted ways.However, during the tenure of her employment at IFL, Ms. Feller produced a great many lab reports on blood alcohol concentration.
As an aside, one has to wonder about the hiring practices of IFL.You have someone caught switching samples at a lab, not once but twice, and you hire her to perform blood alcohol analysis on persons arrested for DWI?I’m still shaking my head.
A “Brady” notice was distributed by the Tarrant County DA’s Office explaining their decision not to sponsor Ms. Feller as a witness.This decision was based on the disclosure of the Cellmark termination letter and her failure to disclose the true nature of what had occurred.
As an attorney with clients who had blood samples allegedly analyzed by Elizabeth Feller, my understanding from prosecutors at the Tarrant Co DA’s Office was that the samples were going to be re-tested.In one case, we waited many weeks for the “re-test” results.What was eventually handed over was an identical lab report where only the date and signature had changed.
Here is a snapshot of the original lab report: 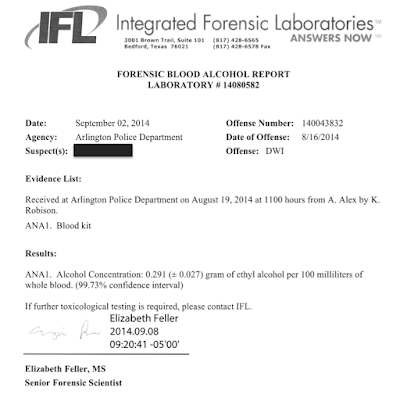 In looking at this report, it appears that a sample was received by IFL on 8/19/14 and analyzed by Elizabeth Feller.The lab report is dated 9/2/14 and the BAC is reported as 0.291.
Here is the alleged “re-test” lab report: 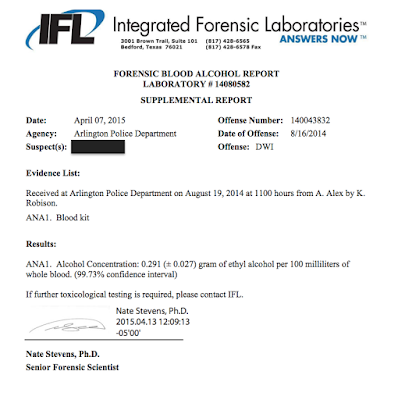 Note that this “supplemental” report is dated 4/7/15 and signed by Nate Stevens.It reports a BAC of 0.291 – identical to the result reported in the original lab report.
I have extensive training in blood alcohol analysis using GC/FID.Thanks to Axion Labs and the American Chemical Society, a lab report bait-and-switch is not going to go unnoticed.The chances that a blood sample analyzed using GC/FID 7 months after the original testing would produce a result that is identical to the 3rd decimal point is about as likely as IFL hiring a qualified person to work in their lab.
I emailed Nate Stevens to ask for an explanation since I suspected (ie. knew) that the blood had not been re-tested.He did not respond.
A subpoena was served on IFL requesting all data related to the original test and the alleged re-test.As expected, the lab was only able to produce data related to the original analysis.There was no re-test.
I sent 2 letters to Sharen Wilson, the newly-elected District Attorney of Tarrant County, to alert of her of this situation.See the excerpts below:
Portions of letter dated 6/2/15:
Ms. Wilson,
I have concerns regarding the blood alcohol testing that is being conducted by Integrated Forensic Laboratories.Specifically, I am referring to alleged “re-testing” of samples that were originally analyzed by Elizabeth Feller.
I am in receipt of two lab reports tendered as part of discovery:one original Feller test and another that was turned over under the guise of a “re-test” by Nate Stevens.Both are attached.
As you can see, they each have different dates and different analyst names, yet the results are identical.I have spoken to many attorneys who have been given two lab reports by your office under the same understanding:The samples were re-tested.Results are identical.
It is extremely unlikely that a blood sample containing ethanol could be re-analyzed months later and produce an identical result to the third decimal point.In fact, if that were to occur once, much less time and time again, we would need to encourage the brain trust at IFL to write up a case study and submit it to the Journal of Forensic Sciences.
I emailed Mr. Stevens to inquire about this situation.He has not responded. A subpoena was served on IFL last week requesting all the lab data regarding the original test and this alleged “re-test”.When I receive the litigation packet, either there will be two sets of chromatograms to correspond to the dates on the lab reports or there will only be one.
The purpose of this letter is to inform you of the issue.At this juncture, I have no reason to believe that your office is perpetuating lab fraud.In fact, I consider your office to be a victim of this lab.You and I have never met but you have a reputation as a no-nonsense person.I am operating under the assumption that you would want to be informed of this situation so that you may investigate for yourself and for the integrity of your office.
If I am mistaken about Mr. Stevens and he turns over to me two sets of chromatograms proving my client’s sample was, in fact, re-analyzed, then we will know that miracles are occurring at IFL and certainly the scientific community at large needs to know all about it.
On the other hand, when he does not produce this data, I will be filing a complaint with the Texas Forensic Science Commission for dry-labbing.
Portions of letter dated 6/4/15:
There is additional information I have gathered and wish to share with your office.Apparently Mr. Stevens testified recently in a trial outside of Tarrant County that he did not re-test Ms. Feller’s samples but, instead, “reinterpreted” them or something to that effect and issued amended lab reports.The transcript has been ordered.
There are 3 points you may want to consider:
IFL's Quality Manual (effective 6/10/2013)
14.4.17 If modification of a previously reported conclusion is necessary due to subsequent testing, reconsideration of test results or new information, the basis for an amended conclusion shall be noted in new examination documentation. The original notes will not be altered.
14.6.1 The laboratory report is intended to communicate the analytical results, conclusions, and interpretation of the Analyst.
14.6.5 Proper case review of examination documentation must be demonstrated when a report is generated by a person who did not perform the examinations. In these cases, or when IFL generates a report based in part or in total on another laboratory’s examination documentation, all pertinent case pages and documents will be initialed, numbered, and treated as IFL generated documents. Large numbers of pages that are bound do not need to be individually numbered, but should have the total number of included pages written on the first sheet. The report will be subject to the same Quality Control procedures and processes as a normal case. The review will be documented in an appropriate Technical/Administrative Form. The form will be saved in the case file.
15.5 Supplemental Reports
15.5.1 The term supplemental report applies to additional reports by an individual section on items of evidence that have been the subject of a previous report(s) by that section.
15.5.2 The heading, “SUPPLEMENTAL REPORT”, will appear in upper case bold letters, below the Lab # on all pages.
I did move forward with filing the complaint with the Texas Forensic Science Commission.They will be meeting in August and will decide whether to move forward with an investigation of my complaint.
Shortly thereafter, I received this response from the Tarrant Co DA’s Office: 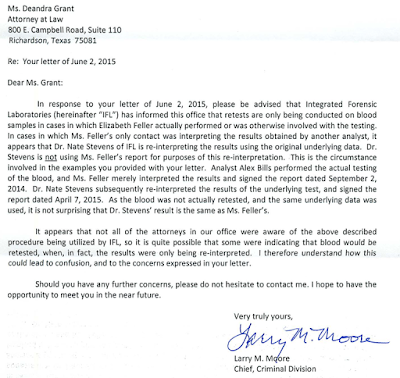 Apparently the new story is that Elizabeth Feller’s name may be on countless lab reports but she did not perform the actual analysis. Or maybe she did.No one but IFL knows.
Who is Alex Bills and why is that name omitted from lab reports if he/she is the analyst?I could find nothing on the batch run lists or chromatograms noting the name “Alex Bills”.
Ms. Wilson issued the following memo dated 6/11/15: 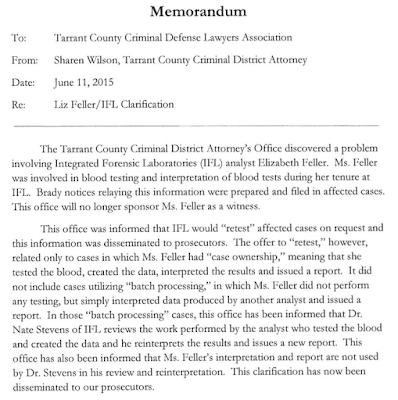 You either are the person who analyzed a blood sample or you are not.In order to come to court and sponsor a blood test, you must be the person who actually performed the analysis.All samples are analyzed in batches.What is “batch processing”?How is Liz Feller “interpreting” another person’s analysis?How is Nate Stevens accomplishing this?I imagine it must look something like this: 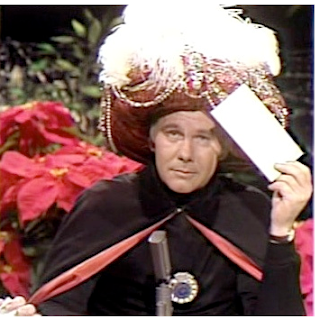 I will update this blog as new information is uncovered.In the meantime, it should be noted that Ms. Wilson recently disclosed that she has uncovered binders of notes from prosecutors who caught officers lying on the witness stand.It appears at this point that defense attorneys were not notified of these incidents.
She said the assistant district attorneys who completed the forms were, in most cases, directly out of a law school and their supervisor believed that the notes would be a useful internal tool in helping young attorneys prepare cases.
“The inherent flaw was that the supervisor did not follow up by reading them for content, which would have alerted the management to the seriousness of some of the observations,” Wilson said in an email.
Richard Alpert was the misdemeanor chief for the majority of the time that the forms were being written, Wilson said.
“He did not monitor the forms for their content, and it was a poor management decision,” Wilson said.
Alpert, considered the state's leading expert on DWI and manslaughter cases, now focuses solely on those specific areas of the law and no longer supervises other attorneys, she said.
Alpert declined to comment when reached by the Star-Telegram on Saturday.
I mention Mr. Alpert for one reason.The Texas Forensic Science Commission has one seat that is held by a prosecutor.That prosecutor is Richard Alpert.This is the same body that now has a complaint pending on the IFL shenanigans.One has to question whether or not Mr. Alpert should abstain from any votes regarding the lab his office continues to sponsor.

"Alex Bills" is Alexandria Bills. She has a BA in Biology and a MS in Pharmacy. Neither of these disciplines has anything to do with analytical chemistry (i.e. blood alcohol testing), but I digress.

Ms. Bills worked in microbiology and as a medical technologist at the Texas Department of State Health Services until joining IFL in 2014. Once again, no background in GC/FID.


Her IFL training records indicate she was in training from June - August. Her trainer? You guessed it - Elizabeth Feller. 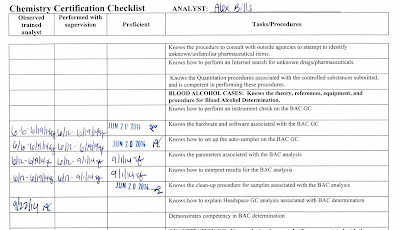 YOU JUST CAN'T MAKE THIS STUFF UP!