Client was involved in a motor vehicle accident involving 2 passengers on a motorcycle. The two vehicles collided in the middle of an intersection. Both motorcycle passengers were killed. It was ultimately determined that the motorcycle driver went through a red light. He also had a BAC of 0.13.

Client was transported to the hospital where blood was drawn for medical purposes approximately one hour after the accident. A red top tube was used which means the tube had no preservative or anticoagulant present. Webcol, which is 70% isopropyl alcohol, was used to swab the draw site.

Approximately 4 hours after the accident a consensual forensic blood draw was performed using Betadine and a grey top tube (containing preservative and anticoagulant).

The hospital lab returned an enzymatic assay result of 113 which roughly converts to a BAC around 0.10. The forensic draw was analyzed via gas chromatography with a flame ionization detector and returned a result of 0.05.

The Standard Operating Procedure (SOP) for blood draws was obtained from the hospital lab, along with the SOP for the enzymatic instrument and the enzymatic assay kit used to analyze Client’s blood plasma.

The hospital SOP contained this language (common with all hospitals):

The instrument SOP contained this language:

To be considered reliable, evidence-based on a scientific theory must satisfy three criteria:

An expert witness was not retained by the defense so rather than attacking the 1st or 2nd prong we chose to challenge the alcohol result noted in Client’s hospital records under the 3rd prong.

In a hearing regarding admissibility of the hospital enzymatic result the blood drawer was called to testify. He agreed that he used Webcol and that it was a violation of the hospital SOP. 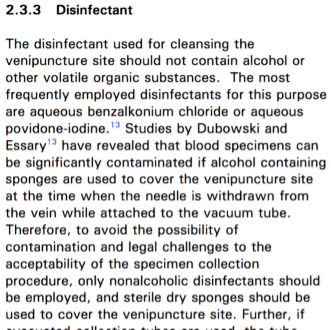 He testified that the reason isopropyl alcohol is not used is the risk of cross-reactivity with the ethanol and the potential for an inflated ethanol result.

The State’s DPS analyst was in the hallway so I called him as a witness. When questioned about the differences between forensic blood analysis via GC/FID and an enzymatic essay, he testified that the GC can separate isopropyl alcohol and ethanol so use of an alcohol swab is not problematic. However, with an enzymatic method you can have cross-reactivity and a falsely high alcohol reading if there is isopropyl contamination.

The Judge ruled that the hospital alcohol analysis was inadmissible because the technique was not properly applied on the occasion in question.

The trial continued with the 0.05 BAC being admitted into evidence. No other evidence of intoxication was introduced. In fact, Client had 0 clues on the HGN test.

Ultimately, the jury found Client NOT GUILTY of DWI.